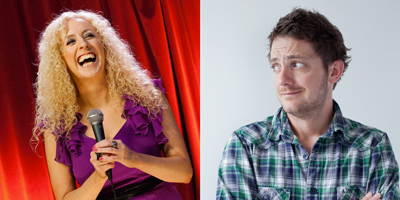 Niamh’s energetic, bold and daring style of comedy makes her original and memorable. She has performed alongside comic legends Eddie Izzard, Tommy Tiernan and Dara O’Briain.

In 2013 Niamh made it through to the judges round on Britain’s Got Talent and received 4 yes’s from the judges.

She starred in the TV3 Comedy show ‘The Stand Ups’ and was a finalist of RTE’s New Comedy Awards.

In the past year Danny O’Brien has gigged for Freemasons, attempted to coax Cubans out of communism, moved in with his girlfriend’s Yankee candles, bought a dead man’s car and continues to try and defend himself from a wave of relentless wedding invites whilst also battling his cooking show addiction! His new show also recounts his premature mid-life crisis brought on by a severe case of ‘the early thirties’. He still drives a Skoda.

Roll of Thunder, Hear him Cry..

Danny has been performing stand-up comedy for over seven years, performing regularly at top comedy clubs and festivals in Ireland, the UK, Europe and the US. With his chatty, anecdotal comedy, this raconteur will draw in an audience and bring on the big laughs with ease.

“Disgraceful and unacceptable".
A couple of auld geebags

“Instantly amiable, his easy Irish charm and repartee quickly won over the audience… it’s all done with affection and no little style. What Danny also has going for him is he’s young, got a good look and he can tell a story better than most.”
Giggle Beats(UK)