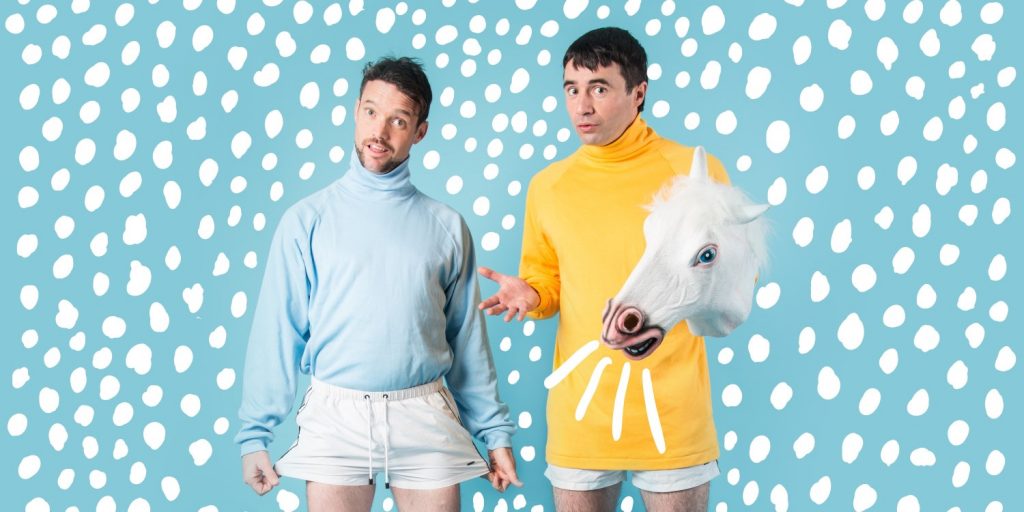 Fresh from a critically acclaimed season in Edinburgh and a 12 month tour taking them across the globe from Melbourne to Dingle, the fame obsessed and socially impaired, Lords of Strut make a highly anticipated return to Wexford with a show that (they believe) could well be giving Graham Norton and Jonathan Ross a run for their money.

The talented but idiotic brothers Seamus and Sean’s dream to host their own TV talk show has come true. However, this is the action packed talk show that’s all talk and no action as it all goes terribly wrong and yet hilariously right. This wonderful disaster in the making rapidly turns into a thrilling soap opera of the absurd, with talking rocks, stupid gags and dance routines so flash it could be the 80’s! A fantastical hour of slapstick mayhem in the guise of a TV talk show.

Lords of Strut are Cian Kinsella and Cormac Mohally, playing the characters of Sean-tastic and Famous Seamus. They started out as street performers touring Ireland, Europe, Australia and Canada extensively and went on to win the Street Performance World Championship in 2013 and their children’s show won the BDO Children’s Event Award in Perth. Their brilliantly chaotic shows for stage and street, videos, street art and flash raves have been adored by audiences around the world. If you haven’t seen them before you are in for a treat… they are very good!

"If Michael Flatley and Jim Carey had a sado-masochistic love child, they would be it!”
Eile Magazine