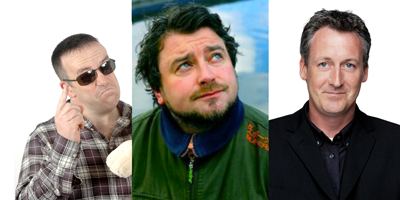 As well as staring in Irish Pictorial Weekly, John Colleary is the star and co-writer of three times IFTA nominated The Savage Eye.  John’s other TV credits include appearances on Stand And Deliver (live from Roisin Dubh) & The Panel (RTE2), as well as being the writer / performer of the popular slot Last Orders on TODAY FM’s Last Word with Matt Cooper.  Voted fourth best comedian in Europe by BAIL OUT MONTHLY Magazine John Colleary is “a must see” comedian.

Over the past decade, Colum McDonnell has established himself as a regular on the Irish and UK comedy circuits, with his unusual and often self-depreciating outlook on family, life, love and the pain of being the last-living hobbit in Ireland.

His TV credits are numerous, including, most recently, ‘Bridget and Eamon’ and ‘Irish Pictorial Weekly – 1916 Rising Special’, ‘Republic Of Telly’, ‘The Podge and Rodge Show’, Comedy Centrals ‘The World Stands Up’ and Des Bishop’s ‘Under The Influence’.

According to Hot Press magazine, Barry Murphy is “one of the high kings of Irish comedy” and is simply not to be missed. His sheer originality and overwhelming talent guarantee that there is no other performer like him.  The IFTA nominated writer’s CV is one to envy – main man on Irish Pictorial Weekly, one third of Apres Match and the legendary Mr Trellis, host of The End and Stand and Deliver, co-founder of the International Comedy Club and co-creator of Soupy Norman.

“Barry Murphy is the Comedy Don”
The Irish Times.